Among the aircraft on display at the Commercial UAV Expo was a hometown hero that got a lot of attention from the attendees. BRINC Drones, founded in Las Vegas by a 19-year-old entrepreneur with a profound vision for how to use drones to help first-responders save lives. Blake Resnick established the company following the horrific Mandalay Bay shootings in 2017.

Convinced drones could be a benefit in these types of tactical situations, he called the Las Vegas Metropolitan Police Department SWAT team commander five times before he got a call back. In just nine months, the company has grown from having just one employee — Resnick himself — to having 55 people working full time, including the now former SWAT team commander.

The company’s signature product is the Lemur: It’s a decidedly old-school quadcopter that uses an analog video transmitter, just like the FPV racers do, to provide the pilot with a view of what the drone is seeing.

“This drone is made to be used principally indoors,” said Brett Kanda, the company’s vice president of sales and marketing. “We found that we get better penetration through structures using an analog signal.” 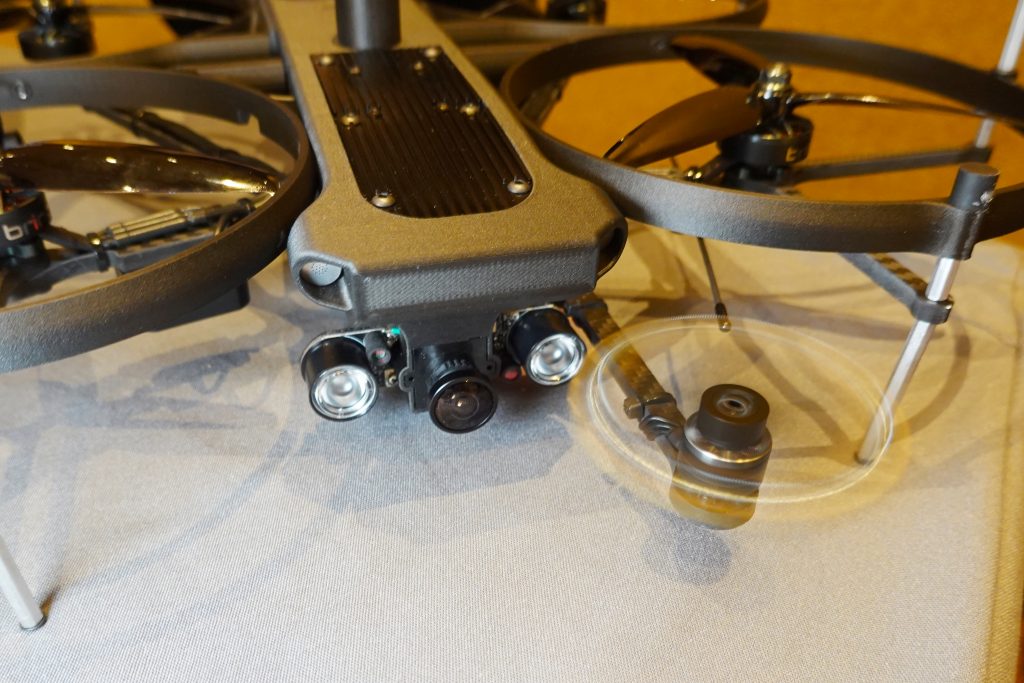 Indeed, every aspect of this aircraft has been optimized for indoor flight, from the design of the airframe to the programming of its flight control system. The propellers are shrouded to so that they can come into contact with walls or other obstacles without bringing it down — but that only solves half the problem, according to Kanda.

“If you’ve ever seen other drones hit a wall, even with propeller guards in place, you will notice that they tend to flip over,” he said. “We’ve baked some software into our flight controller so that the Lemur will not flip up against a wall. You can go full throttle into a wall, and it will maintain its position, so you can even use it to push open doors. And, if it does crash, you can just turtle mode out of it.”

The ‘turtle mode’ that Kanda described is a pre-programmed maneuver that the pilot is able to engage if the drone ends up upside down on the ground. Engage it, and the Lemur flips itself upright in order to continue the mission.

Especially popular among attendees at the expo were the accessories that are available for the Lemur.

“On the bottom of the aircraft is a Picatinny rail with embedded power,” said Kanda, referring to a standard type of mounting hardware used to attach flashlights and other accessories to firearms. “Everybody’s favorite is the glass breaker, which can be used if SWAT needs to breach a window, for example. It attaches to the front of the aircraft, and this tungsten-carbide tip spins at up to 30,000 RPM. Then, all you have to do is tap the glass, pull back and make entry.”

Indeed, this accessory was demonstrated during the outdoor flying event, and a pane of glass set up as a target exploded when the drone made contact with it. Other accessories include a floodlight, a drop mechanism capable of carrying and delivering a one-pound payload and a bracket that attaches the Lemur to a terrestrial robot — allowing it to hitch a ride inside a structure and continue forward if the robot’s path is blocked by a staircase or debris.

Perhaps most crucially, each Lemur drone has its own phone number, so that a negotiator can dial it up and use the drone to speak with a barricaded suspect or a hostage taker. By landing once it is near enough to the suspect for verbal communication, the Lemur can keep the line open for up to 10 hours.

“This system is built to help de-escalate situations — to help keep officers safe and also suspects,” said Kanda. “This is a tool that is helping to move policing the way it needs to go: slowing everything down. In the future, law enforcement is going to be asked, ‘Did you use technology first, in order to be able to identify and communicate with a suspect?’ Now, we can do that.”